Kevin Spacey plays a cringing, weak character in the movie, The Usual Suspects. He’s part of a group that’s been hired by the mysterious Keyser Soze to pull off a heist. Keyser Soze is a mysterious criminal mastermind that no one has ever met before. The group isn’t even certain that Soze exists.

The plot unfolds from the point of view of Kevin Spacey, who has been caught by the police, having been scapegoated by the others. As he tells the story, he says of Keyser Soze: “The greatest trick the devil ever pulled was convincing the world he didn’t exist.” The plot twist at the end is that Kevin Spacey is actually Keyser Soze. He had been hiding in plain sight the whole time.

Maybe the greatest trick the devil ever pulled was indeed convincing us he doesn’t exist. Many today don’t believe in the devil or his demons. But not only are they real, they are waging spiritual warfare all around us. We can’t see them or feel them, but they are there, fighting against God and His people.

There was once a man who was possessed by several of these demons. He would terrorize the local population and couldn’t be controlled or contained. But then one day, the man and his demonic possessors encountered Jesus:

And when he saw Jesus from afar, he ran and fell down before him.  And crying out with a loud voice, he said, “What have you to do with me, Jesus, Son of the Most High God? I adjure you by God, do not torment me.” Mark 5:6-7

Make no mistake: Satan and the demons are very real. They are powerful and dangerous. But they have also been defeated. We fight not in our own strength, but in Christ’s. He has already defeated Satan and his demons. They know it, and are terrified because of it. And because Jesus has defeated them, we fight not for victory, but from it. So while the demons are real, our God is bigger and stronger. He has already been victorious, and we stand in that victory! 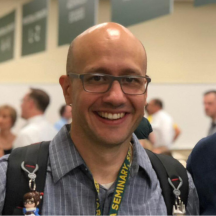